Scientists at the National Renewable Energy Laboratory (NREL) — working with researchers at NASA and in Europe — identified a solution to preventing a dangerous chain reaction in lithium-ion batteries known as thermal runaway. 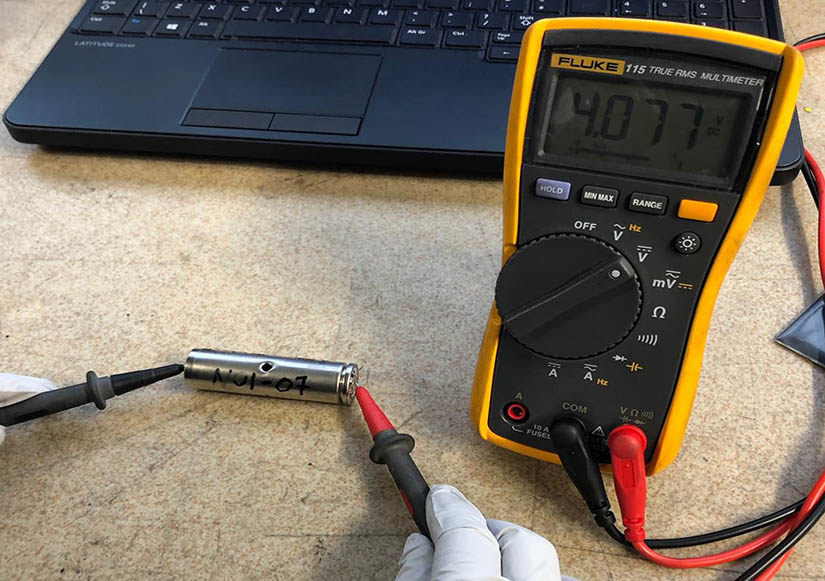 A high-energy density cell, shown here, holds its voltage despite having being penetrated with a nail.

“It is very rare that batteries fail catastrophically, but when that does happen it can be very damaging,” said Donal Finegan, a staff scientist at NREL whose work involves improving the safety and performance of lithium-ion batteries. “Not only just for the safety and health of people involved, but economically as well for a company.”

Most cases of thermal runaway can be traced to an internal short circuit. That short generates an increasing amount of heat that can trigger a failure in adjacent batteries and spark fires. The temperature inside the battery has been shown to top 800 degrees Celsius (1,472 degrees Fahrenheit).

“When a battery does fail, it fails very quickly, so it can go from being completely intact to being engulfed in flames and completely destroyed within a couple of seconds,” Finegan said. “It’s very fast and very difficult to understand what happens in that two seconds. But it’s also very important to understand exactly what happens because it is the management of those two seconds that is important for improving the safety of batteries.”

In addition to NREL and NASA, the international research effort to understand what happens during a thermal runaway involved scientists from University College London, The Faraday Institution in Oxford, National Physical Laboratory in London, and The European Synchrotron in France.

The scientists experiment on 18650 cells, a specific size for a rechargeable lithium-ion battery used in electric vehicles and in aerospace applications, by driving a nail into them to trigger a short circuit. High-speed X-ray imaging at 2,000 frames per second enabled the researchers to capture what happened inside the batteries with great detail.

Lithium-ion batteries use a current collector to conduct electricity to and from the negative and positive terminals. These collectors are typically made of either aluminum or copper. The researchers took a different approach and examined a collector with an inside layer of plastic between the metal. The polymer current collector (PCC) was manufactured by Soteria Battery Innovation Group, of South Carolina, and the custom 18650 batteries made by Coulometrics, of Tennessee.

Repeated experiments with a nail penetrating the batteries proved the addition of the polymer current collector in the positive electrode was sufficient in every instance to prevent thermal runaway. As the temperature increased, the PCC shrank to isolate the nail from the negative terminal and thus shut-down the short circuit.

The scientists noted their research may provide increased confidence in the manufacture of inherently safer batteries that are constructed with this polymer-based current collector.

Finegan said driving a nail into a battery is “a pretty crude testing method” but aims to capture the mechanical abuse a battery might experience in the case of an electric vehicle getting into a serious accident, for example.

The work conducted at NREL was funded by the Department of Energy’s Vehicle Technologies Office.

The latest research comes on the heels of NREL’s release of the Battery Failure Databank, a compilation of data generated by hundreds of abuse tests conducted on lithium-ion batteries. The databank provides information on how much heat a battery generates during thermal runaway and how much is released from the battery, as well as hundreds of high-speed radiography videos of internal failure mechanisms.

“Small manufacturers don’t always have the time and the resources to test batteries in such a rigorous way that we have over the past five to six years,” Finegan said. “They can just, for free, come to the NREL website, download all of this data and make their own assessment of how safe the batteries are that they may or may not choose for their application.”

Article courtesy of the U.S. Department of Energy, NREL.