The layer of dust and pollen that settles on the windshield of your car is easily removed with a turn of the lever that activates wipers and water. Removing that layer from a solar panel — especially one inconveniently located from any source of moisture — requires considerably more work.

The accumulation of dust, soot, or other particulates causes a drop in the efficiency of photovoltaic (PV) panels, which translates to a decline in the amount of power produced and lost income for their operators. But cleaning these solar panels carries a cost as well.

Ongoing research at the National Renewable Energy Laboratory (NREL) into the problem of PV “soiling” continues to work toward possible solutions, including patented technology to address the problem and providing a map of where soiling poses the biggest issues.

Soiling a Problem from the Start

Since solar power first became widely accepted decades ago, scientists have toiled to improve the efficiency of PV panels and to bring down the cost of producing electricity from the sun. Those were the big tasks. Now, with solar providing an increasing percentage of the nation’s power needs at a low cost, researchers have turned to secondary problems with the technology.

The energy lost annually from soiling amounts to as much as 7% in parts of the United States to as high as 50% in the Middle East.

Rain and wind can be enough to scour some dust from PV panels, said Lin Simpson, who served with Muller as the co-principal investigator at NREL for a $6 million Department of Energy–funded research effort into soiling from 2016 to 2019. However, because PV panels cool down at night and attract morning dew, the dust can go through a process called cementation. The soiling is literally cemented onto the panel.

“Depending on what area you’re in, you can have different minerals that are deposited as dust on the surfaces,” said Simpson, a senior scientist. “Once it goes through the cementation process, it can become much more difficult to remove to where even a strong rain won’t remove it.”

A one-time cleaning for a 10-megawatt solar farm — which provides enough electricity to power 2,000 homes for a day — can cost an estimated $5,000. Simpson said in some areas, such as California’s Central Valley where “soiling rates get sufficiently high and the rain sufficiently low,” it makes economic sense to clean the panels more than once a year.

Solar panels initially were designed to last from 25 to 30 years. Technological improvements could lengthen their lifespan to as long as 50 years. Investing in solar — particularly in a large, utility-scale facility — requires studying such factors as how much energy will be produced and how much it can be sold for. That information allows companies to determine the return on their investment.

One factor to consider is the amount of soiling the site is expected to experience, but no one can accurately predict that. “We’re not there yet,” said Michael Deceglie, a staff scientist at NREL who works on PV soiling. “Solar panels get dirty, and that’s a substantial uncertainty for their energy over time. And with uncertainty comes risk for the people who own the assets because they’re depending on that to make energy and they’re protecting their investment. The industry would benefit from having a better quantification of that risk at various sites and with various factors.”

For now, the operators of utility-scale solar farms learn from experience how often the panels need cleaning and can measure how much energy they would lose against how much it costs to clean them, he said. “Folks would rather know what they’re going to lose over the years than have it be a total unknown, because a total unknown is risk.”

A patent issued last summer to Muller and researchers in Spain covered a possible solution. A sensor can be affixed to the glass in front of a solar cell and, by shining an LED through it, measure the amount of soiling. The measurement comes from comparing the transmission loss through the glass against a clear reference glass pane. The technology is called “DUSST,” which stands for Detector Unit for Soiling Spectral Transmittance.

Simpson said NREL scientists also are developing a way to pull information from PV modules to help with the soiling issue. By checking the amount of electricity produced daily, they would look for “certain signatures that a significant amount of soiling has occurred. This would be useful to be able to tell an operator that you’re losing X amount of power and you probably should look at cleaning soon.”

The alternative is setting up a soiling station. A sensor installed on a PV panel is regularly cleaned while another is allowed to become dirty. A comparison between the two provides an estimate on soiling. Deceglie points out a disadvantage to using sensors: “If you have a big array, different parts of the array may be getting dirty differently. A sensor is never going to capture what’s going on with the whole big array.”

Deceglie and Muller have helped develop algorithms that allow for more accurate soiling estimates. They first developed the Stochastic Rate and Recovery (SRR) algorithm, and more recently Deceglie worked with visiting researcher Åsmund Skomedal to develop the Combined Degradation and Soiling (or CODS) method, which allows users to simultaneously estimate both soiling and natural degradation of PV panels. Both algorithms use energy production data from PV systems. NREL is making SRR and CODS freely available as part of RdTools (with the incorporation of CODS still under development).

Coupling SRR or CODS with information from a soiling station should provide the most complete picture, Deceglie said. “I personally am excited about both of those data sources together so we can play on the strengths of each so we can get a really good picture of what’s going on at a site.”

Urban Environment Gets a Close Look

Sarah Toth’s research into soiling hits closer to home as she explores the correlation between air pollution and soiling, specifically in urban areas. Toth set up two low-cost silicon sensors in an industrial area three miles from downtown Denver. One sensor was automatically brushed clean daily; the other, never cleaned. At the end of the year-long experiment, Toth found she could accurately model the soiling ratio based only on accumulated particulates and rainfall. She also discovered rain could naturally wash away most of the course particles but not fine ones, which tended to stick to the surface.

“The reason I concentrate my research on these urban environments is because the composition of soiling is completely different,” said Toth, a Ph.D. candidate in environmental engineering at the University of Colorado who has worked at NREL since 2017. “We have more fine particles that are these stickier particles that could contribute to much different surface chemistry on the module and different soiling. In the desert, you don’t have as much of the surface chemistry come into play.”

“What we’ve seen anecdotally by looking at aged molecules under the microscope,” she said, “is after a few years they just have some sort of surface contamination that we just cannot get off, no matter how much we scrub it. In order to remove it, you actually have to scratch the glass.” 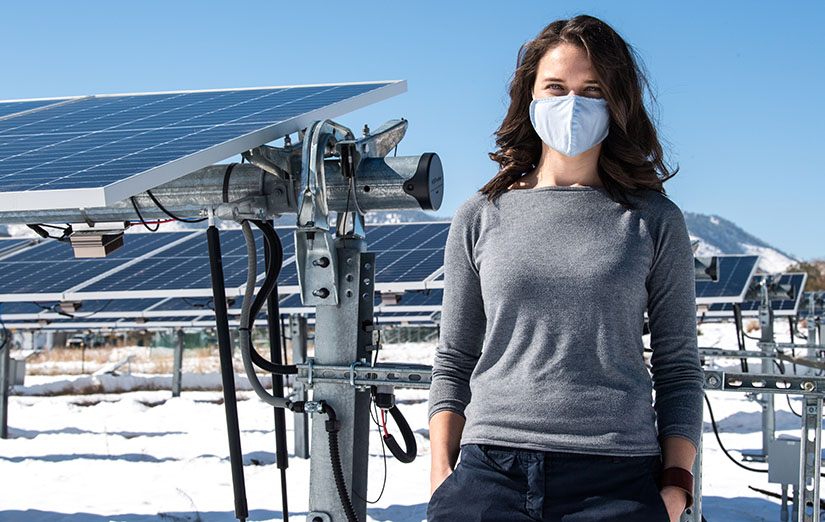 NREL researcher Sarah Toth stands next to a PV tracking system at NREL. Like any PV system, these attract dust. Toth has developed sensors to measure real-time soiling ratio and installed some in Los Angeles. Photo by Dennis Schroeder, NREL

Many Ways Considered To Ease Soiling

Limited information is available on soiling by location, including on a map produced by NREL. “One of the biggest things we’re trying to do to help now is we’re trying to gather data and put it on a map,” Muller said. “We have a long way to go on that.”

Even without more information, manufacturers are trying to make soiling less of a problem — or at least easier to address. One possible solution is a coating over the surface of solar panels. An example of this strategy is a hydrophobic coating, meaning it repels water. If the panel is at a steep enough angle, dew or rain would run down its surface and wash away the dust. But in installations where the angle of the panel is nearly horizontal that will not work.

Robots might work in some areas. Autonomous robots equipped with rotating brushes have been put to work in the Middle East to whisk away dust from solar panels.

“If you brush the dust off these panels at a sufficient rate, it does keep them pretty clean and you don’t get the cementation forming,” Simpson said. “That requires you to clean them off every day or every other day or so.”

No single solution exists to clean solar panels. In areas of high humidity, Simpson said, fungus has been known to grow. “This fungus is a living organism that anchors the dust to the panel, and the fungus itself blocks light getting to the panel. The fungus is very difficult to get off. It requires chemicals and quite a bit of scrubbing.”

The solution for soiling on solar panels may require several different approaches, but it is a problem researchers have pledged to solve.

How Long Does It Take To Charge An Electric Car? A Few Seconds