Many people want both Tesla solar (the conventional solar panels or the solar tile roof) and a Tesla Powerwall. Many just want the solar. If you are in the latter camp, you have just one week left to place your order.

Tesla CEO and Technoking Elon Musk just tweeted that Tesla solar products will only come combined with a Powerwall (or more than one Powerwall) starting next week.

At first, that tweet was a bit bewildering to me, for a few reasons.

First of all, a Powerwall costs several thousand dollars ($7000+). That’s going to immediately price some people out of the market. Also, many buyers have no need for one or feel no need for one. Frankly, it’s very hard to get your money back on the product from electricity arbitrage alone (as always, though, it depends on your circumstances). Its greater usefulness is probably keeping the power running in the event of a blackout, but not everyone is in need of that or feels that’s worth several thousand dollars. (When I was a kid, we just lit candles if the lights went out for a bit, and we didn’t rely so much on this newfangled TikTok and internet nonsense.) Thirdly, one of Tesla’s biggest challenges in the electric vehicle arena is lack of batteries, so why force people going solar to get a Powerwall? (Yes, I’m aware that the Powerwall uses a different chemistry than the batteries in electric vehicles. Still, there are shared minerals and production capacity choices that must have some cross impact.)

However, Elon seems to have explained — at least in part — what is bringing this change. He writes: “Solar power will feed exclusively to Powerwall. Powerwall will interface only between utility meter & house main breaker panel, enabling super simple install & seamless whole house backup during utility dropouts.”

Be prepared for the media to spin this as negative somehow. The advantages are 1) no utility interconnection costs/delays 2) lower install costs 3) better ITC absorption for US customers 4) less line losses. There are probably others I’m not thinking of. https://t.co/fCgb8V8lo2

Tesla Solar Roof on California home. The home also has Tesla Powerwalls and electricity flows seamlessly even in the case of a grid blackout. Photo by Kyle Field, CleanTechnica. 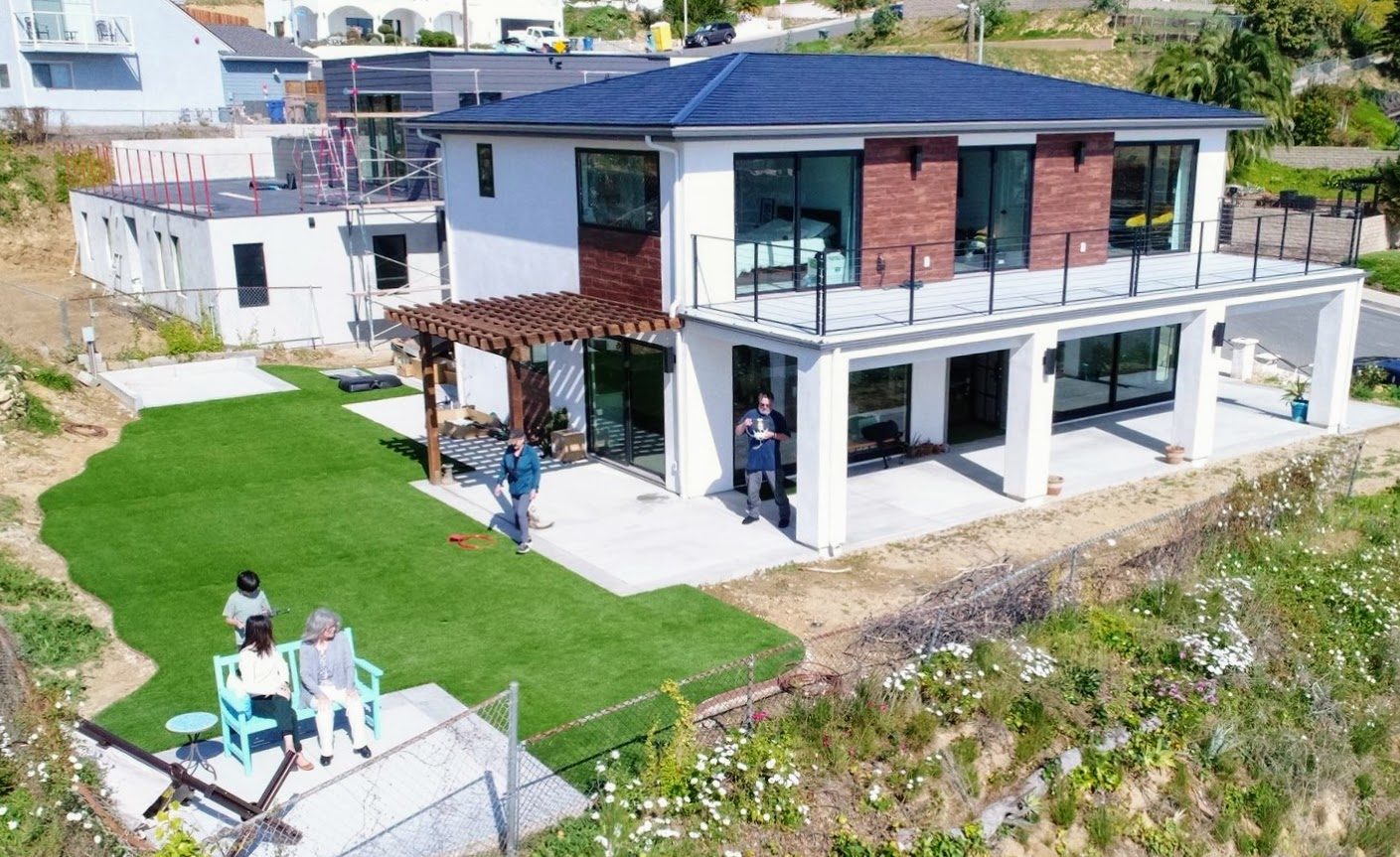 Tesla Solar Roof on California home. The home also has Tesla Powerwalls and electricity flows seamlessly even in the case of a grid blackout. Photo by Kyle Field, CleanTechnica.

Secondly, Elon emphasizes that this specific setup is what keeps your house running in the event of a utility power outage. That is something many people don’t realize — that if your solar system is connected to the grid (not via a battery), it may be useless during a grid power outage. The utility probably won’t let it operate. Don’t believe me? Sunrun, the largest residential solar installed in the United States, tells us the same thing. “Solar panels alone won’t work during a power outage—but when paired with solar battery storage, they can,” the company puts in a big, bold subheading at the top of an article titled, “Will Solar Panels Work During a Power Outage?” Sunrun adds, “Currently, the electric grid will shut down during extreme weather conditions or if consumer demand overloads the system. This power outage would include your solar panel system. Utilities can also shut down if they think the grid will become overloaded.

“One of the reasons for a shutdown is to protect utility technicians who are sent to fix damaged power lines. The other reason is that your solar panel system is connected to the grid via a solar inverter (or ‘grid-tied solar’). The inverter runs to a smart meter that records the amount of energy you use, and also the excess solar energy that is sent back to the utility. So if the grid shuts down, so will your solar panels.”

With that context, two things come to mind regarding Tesla’s new policy. First of all, the company may have found that a lot of solar customers thought their battery-less solar system would work in a blackout, only to be disappointed when it didn’t. I think that is a common misconception (hence Sunrun’s article noted above). Another possibility is that most Tesla shoppers were explicitly eager to get protection against blackouts and it just made sense to streamline the offerings and only offer the paired technologies. This makes sense in the wake of the horrible wildfires and blackouts in California in recent years as well as the disastrous blackout that just occurred in Texas.

Additionally, it’s been clear that Tesla has far more solar power demand than it can quickly satisfy. So, perhaps the company sees this as a way to both get the most out of a customer order (sell the most product) and get demand and supply to match up a little better.

Solar permitting appears to be the biggest bottleneck in the US rooftop solar industry. (Though, I have a fun and fascinating CleanTech Talk podcast publishing on a top solution to this in one week, on April 29. Stay tuned!) As hinted above, it may largely be that Tesla can get projects permitted much easier and quicker if there’s a Powerwall included in the project. Or that’s just wild and incorrect speculation. I’m not sure if that affects the speed or ease of the permitting process at all.

Overall, I’m still a little confused why you wouldn’t sell rooftop solar panels or rooftop solar tiles (“Solar Roofs”) to people who want solar power but don’t want a battery connected, but all of my thoughts for why that might make sense are above. Clearly, Technoking Elon sees a practical and financial benefit to the change, and you shouldn’t question a Technoking about this kind of thing.

In the end, though, I think this also opens up some interesting new market dynamics. As I’ve mentioned for months, Tesla solar is apparently now the cheapest rooftop solar power you can get in the United States. And Elon Musk explained to CleanTechnica why that is. By eliminating its solar-only option, Tesla is now leaving more space in the market for other companies offering rooftop solar, like Sunrun, SunPower, Vivint Solar, and countless local solar installers. Well, not now — starting next week. If you want to order rooftop solar power from Tesla right now and don’t want to tag batteries on, then you have a few days to place your order. After that, it looks like you will have to forever hold your peace and find solar elsewhere.

If you’d like to order Tesla solar and get a $100 discount, feel free to use my referral code: ts.la/zachary63404 Have a tip for CleanTechnica, want to advertise, or want to suggest a guest for our CleanTech Talk podcast? Contact us here.
0 57
Share FacebookTwitterGoogle+ReddItWhatsAppPinterestEmailFacebook MessengerLinkedinTumblr

Tesla Powerwall To Get Huge Boost Via Software Update Next Month