LA Is Prioritizing Environmental Justice on Path to 100% Renewables

For decades, power system planning has optimized costs and efficiency over the experiences of some communities, meaning vulnerable neighborhoods have long suffered proximity to polluting power plants and lack of access to more efficient technologies. But national momentum building around clean energy transitions presents a pressing opportunity to change this — making sure the benefits of cleaner power systems are delivered broadly to all communities.

Prioritizing environmental justice was a crucial component of the recently released Los Angeles 100% Renewable Energy Study (LA100), a partnership between the National Renewable Energy Laboratory (NREL) and the Los Angeles Department of Water and Power (LADWP) to analyze how the second-largest city in the nation can reach its 100% renewable energy goal equitably and economically.

Jaquelin Cochran manages NREL’s grid systems analysis group and served as principal investigator for LA100. We caught up with her to learn more about how this landmark study is helping LA move the needle on prioritizing environmental justice — and what is next for NREL in continuing to center equity in our research. Environmental justice is codified in California state policy as “the fair treatment and meaningful involvement of people of all races, cultures, and incomes with respect to the development, adoption, implementation, and enforcement of environmental laws, regulations, and policies.”

For a clean energy transition to be successful, it needs to reflect the community. These are major changes that will affect communities and the individuals within them in so many ways — from the infrastructure that is built near their neighborhoods, to opportunities to install rooftop solar or make energy efficiency upgrades, to the potential to participate in utility incentives to use electricity more flexibly. 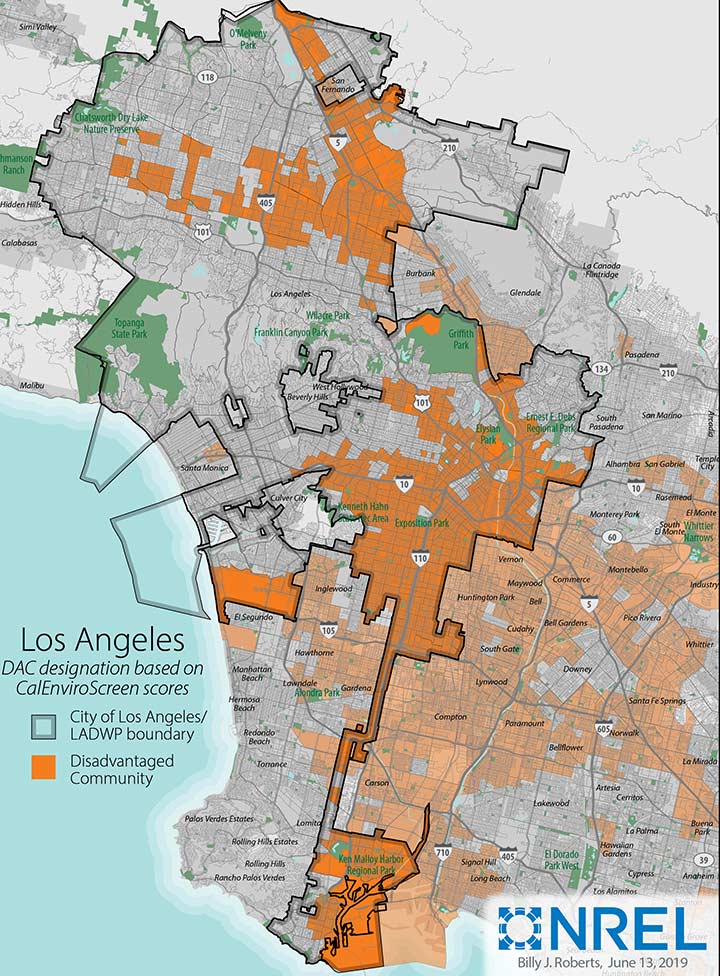 Almost half of the census tracts in Los Angeles are designated as disadvantaged based on California’s CalEnviroScreen tool, which identifies communities that are most vulnerable to and affected by different pollution sources. Map by Billy Roberts, NREL

In developing the City Council motions that spurred the LA100 study, the City of Los Angeles identified environmental justice as both a key motivation and an intended outcome for the city’s transition to 100% renewable electricity.

The LA100 study addressed environmental justice both in the process of doing the research and within the analysis itself. How did the team approach this on the procedural side?

Our NREL team worked closely with LADWP to make sure LA community members had a voice that was represented in the research. It’s so important to hear directly from individuals about their priorities — for example, are they on a fixed income and worried about future impacts to their energy bills? Are they concerned that renting versus owning their residence inhibits their access to a more energy-efficient home? Do they worry about having sufficient cooling to withstand increasingly frequent heat waves? All of these really important questions are fundamentally grounded in community and customer experiences.

So, we had a number of one-on-one listening sessions with different environmental justice groups to listen to their concerns and visions for LA’s energy future and to get their recommendations for how to better involve community members in the process — especially those from marginalized communities who may face barriers to participation. We coupled these sessions with community outreach events that were presented in both Spanish and English to improve accessibility for the city’s sizable Spanish-speaking population.

And every step of the research was guided by the LA100 Advisory Group, which included members of LA neighborhood councils, industry, city government, and more — and made environmental justice a repeated, regular topic in quarterly discussions with our research team throughout the multiyear study.

Some of these discussions helped shape the future scenarios we developed for the study. For example, one set of scenarios does not allow biofuels to be used, which is an important consideration for disadvantaged communities when it comes to their proximity to dairy farms that may be used as sources for biofuels, and their exposure to pollutants from combustion of these fuels in nearby power plants.

Turning to the research itself, what did the study find as a result of the environmental justice analysis?

Both disadvantaged and non-disadvantaged communities could expect to see many benefits in LA’s clean energy transition, including reduced local and regional air pollution, improved indoor air quality from electrification, reduced vulnerability to climate change, and improved health outcomes. But LA100’s results don’t show the majority of these benefits going to disadvantaged communities — so, ultimately, the study underscores the need to intentionally design policies and programs that prioritize environmental justice. Equitable outcomes can’t be assumed as an inevitable result of the power system transition without that intentionality.

We see this with customer rooftop solar, too. Using NREL’s Distributed Generation Market Demand (dGen™) model, we can project customer rooftop solar adoption and look at differences across neighborhoods. Across all the scenarios studied, LA100’s results show significant growth in rooftop solar across the city, in both disadvantaged and non-disadvantaged communities. But the model in LA100 did not capture many distinctions between disadvantaged and non-disadvantaged households that could be important to real-world customer choices, including homeownership, rooftop quality, income, and access to financing. Policy actions to prioritize disadvantaged communities could focus on analyzing these types of factors to break down some of these barriers. 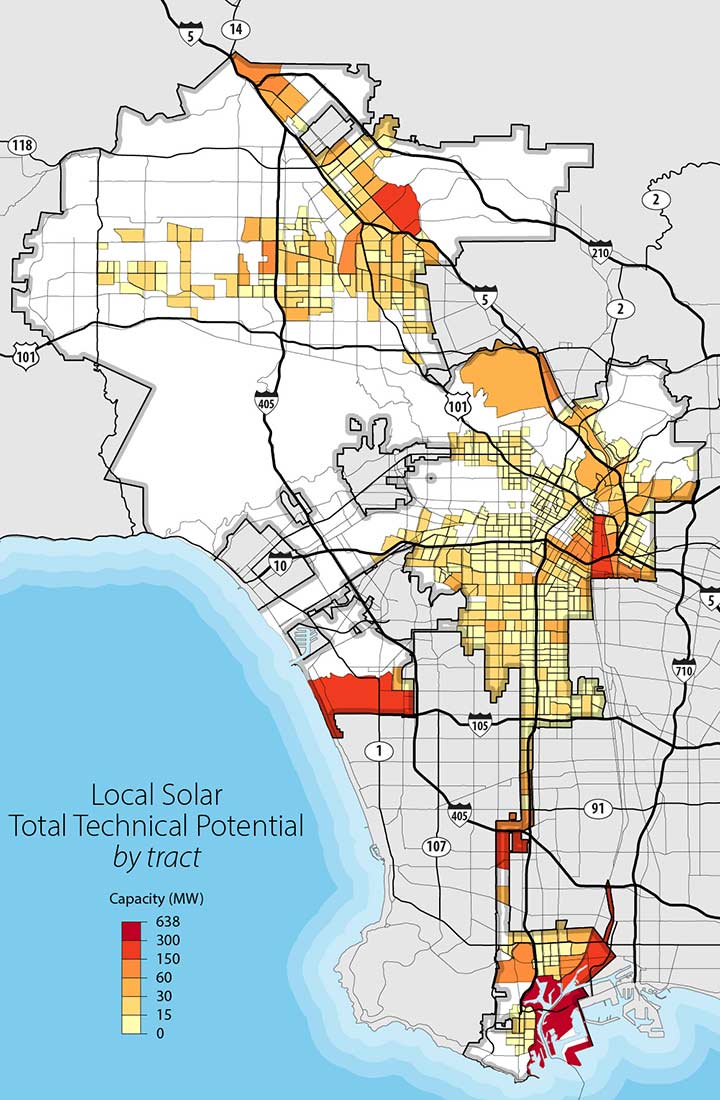 Definitely — here’s an example. LA100’s detailed electricity load modeling gives us a lot of detail on when and where electric vehicle charging might occur in LA in the future. And our air quality modeling shows that electrifying transportation has significant benefits in terms of emissions reductions and public health — across disadvantaged and non-disadvantaged communities alike. Finally, in our power system modeling, we see economic value in having electric vehicle charging occur during the daytime, when solar generation is strong.

However, in terms of environmental justice, we see that disadvantaged communities may value opportunities for overnight charging. So, this becomes a policy question: If it’s best for the power system to encourage daytime charging using incentives like lower tariffs, how do we make sure those incentives don’t harm the communities who don’t have access to charging during the day? There can be tension between what is good for the power system and overall costs that flow down to all customers, versus what might be ideal from an equity perspective in prioritizing disadvantaged communities. Future programs and policies will need to be fine-tuned to address these issues equitably.

Tell us more about the interactions between the environmental justice analysis and power systems modeling. Did the team face any challenges in developing an approach that combines the two?

Researchers often need to focus on addressing a single problem while simplifying others. But when it comes to environmental justice, there are so many different considerations that we can no longer optimize our models across a single goal. Environmental justice is a multidimensional problem, so our modeling approach needs to be multidimensional — and nimble in allowing us to continuously revise our process and reevaluate findings in an iterative way.

For LA100, our initial environmental justice analysis was focused on providing high-level context for LADWP’s ongoing policy and program development — and it definitely helped us identify some gaps in our own research processes. For example, we had insufficient data on how some characteristics of disadvantaged communities or real-world experiences of inequity can be represented in our power system models. We’re now working with the U.S. Department of Energy (DOE) to improve our research tools in this way.

Speaking of DOE, with the new government-wide Justice40 Initiative, NREL’s DOE sponsors have been charged with delivering 40% of the overall benefits of relevant federal investments to disadvantaged communities. What’s NREL’s role in making this happen?

I believe our role is to show how this can be done, by providing detailed methods and objective analysis that demonstrate how to improve outcomes for disadvantaged communities. As a DOE national lab, we at NREL can embody and integrate the core tenets of energy justice in every step of the research and analysis we do. With studies like LA100, we can build and demonstrate a methodology others can use to incorporate and evaluate environmental justice as a fundamental part of clean energy transitions.

In your NREL career, you have worked with several different governments in transitions to high levels of renewable energy — from LA to India. What inspires you to focus on community-centric work?

Science can equip communities to make informed decisions about which energy pathways best reflect their values — but the process starts with listening to the communities. It’s easy for scientists to think we know the right sets of questions to ask in our research. What we get from listening to community members is that, even when it comes to topics like environmental justice, there’s still a diversity of opinion on what that means — we’re never just speaking to one audience. I want to make sure that, as a scientist, I am providing information that is useful in the real world — that our research is in the formats and on the topics of interest to the people it intends to serve.

Dive into the results of the LA100 study, including its environmental justice findings.

Article courtesy of the NREL.

Have a tip for CleanTechnica, want to advertise, or want to suggest a guest for our CleanTech Talk podcast? Contact us here.
0 3
Share FacebookTwitterGoogle+ReddItWhatsAppPinterestEmailFacebook MessengerLinkedinTumblr